This officer's medals will be returned to his family in time for the 100th anniversary of his death. Great work Bill.
The story of the search for the NOK of Lt Austin James O’Connor, has not been easy. Not in the sense of the time and effort required to trace the family but what I found along the way - the sadness and the loss. Perhaps the email I sent to his great nephew says more than enough.

David
Below is the In Memorium that Austin’s sisters put in the Age Newspaper on the 24 September 1919, two years after his death.
The AGE  24 September 1919
In Memorium
On Active Service
O'CONNOR.— ln Sad and Loving memory of our dear brother.
Lieutenant Austin James O'Connor, (Mick). 7th Battalion, died of wounds on the 24th September, 1917, received at Polygon Wood on the 20th, only son of James O'Connor and loving  brother of May and Eileen. Rest in peace.

No one knows the silent heartache.
Only those who can tell:
Who have lost their best and dearest.
Without a last farewell.
— Inserted by his loving sisters. May and Eileen.
This link shows a photo of Austin.

The returned medal tally is now 2036. 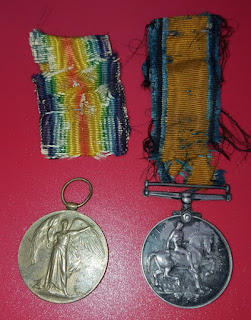 Posted by Lost Medals Australia at 17:39