Bill's latest success.
It was after the first 6 or 7 lines detailing the return of the Service Medals of VX101732 Private Arther James Murphy that the feeling of having been here before hit me. It should have as the medals came from the same box as those of SX12221 Staff Sergeant Donald Lloyd Rankine. Which in turn brought forward the same questions previously faced, namely how, from where and when.
The answer was the same so the search started out the same way. War Graves gave me a date of death, 29/1/1982, and his internment in the Garden of Remembrance at Springvale. This led me to the deduction that if Arther had married, his wife would have been buried somewhere else, unless she had also served.
At this point I turned to Australian Surname Genealogy Group (Yuki) and their resources. One of the first responses I received was, was I sure how Archer spelt his name was it Arther or Arthur because both had turned up. From here on it was almost a complete rerun of the previous search, through the Electoral Rolls we located Arther’s wife Mavis and her death in 1996. Then the Yuki team located Amanda the great great niece of Arther and after a scramble of emails, the search concluded.
This Anzac day, Robert Murphy the great nephew of Arther will wear his great uncle’s medals, the first time they have been seen since before Arther’s death in 1982.

The returned medal tally is now 2034. 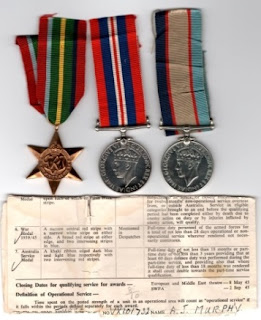 Posted by Lost Medals Australia at 17:02