WWII group of 5 medals to RAN

This group consists of the 1939-45 Star, the Pacific Star, the Defence Medal, the War Medal and the Australian Service Medal 1939-45. The medals were awarded to W1265 Able Seaman James Robert Carr. Carr's service record is also available on the NAA. (To access the service record follow the steps in this tutorial.)
Carr's medals were found in Queensland in 2005, they were then handed in to the Queensland Police who forwarded them to the Directorate of Honours and Awards. The medals were sent to me in 2010. Most of the leads we had ran to nothing and Bill put a post on the Australian Surname Group. Carr's grandson, Ben, came across the entry and got in touch with us.
I'll put the medals in the post next week so that they are with Ben by Anzac Day.
The returned medal tally is now 1116. 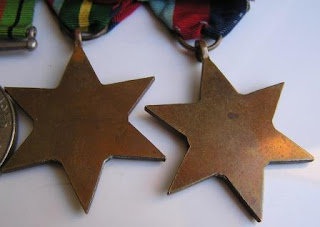 Posted by Lost Medals Australia at 12:00