This Pacific Star was one of those included in the NSW RSL box. It was awarded to N467913 Frederick Arthur Jones. We have had a look at this one in the past but ran in to a few brick walls. I recently decided to have a closer look and combine information from Ancestry.com, The National Library of Australia, the Ryerson Index and the NSW BDM. No one resource gave me close to the full picture so I had to make some extensive notes from the different documents and links that I found.
After all that is got down to taking yet another punt. I knew the address that the Jones family lived in through the 1940s and 50s. This was in a smallish NSW town so I had a look in the White Pages not expecting too much since Jones is a common name. That was until I saw that there was a Jones living at the address next door. A quick check of the electoral rolls showed that this Mr Jones had been in the same house since 1954. If he wasn't related he must have at least known the Jones family I was looking for.
When I called this morning I found he was the brother of Frederick.
This medal is a officially issued duplicate as can be seen by the 'D' under the number and name. By the style and method of naming I estimate that this duplicate was issued in the late 1980s or 1990s.
The returned medal tally is now 1126. 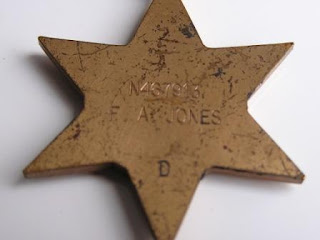 Posted by Lost Medals Australia at 13:56