32621 George Hardy Johnson served in the 10th Field Artillery Brigade. Johnson appears to have gone by the name G Hardy Johnson throughout his life. His service record shows that he was a Land Agent from Guildford, WA.
Johnson's service record also shows that his medals were returned in 1924 as they couldn't be delivered. In 1936 he claimed the medals and signed a receipt for them.
Johnson didn’t marry nor have any children. The medals, which are in as issued condition, will be returned to his great nephew.
(To access the service record follow the steps in this tutorial.)
Thanks to Ian C for sending me the medals. The returned medal tally is now1120. 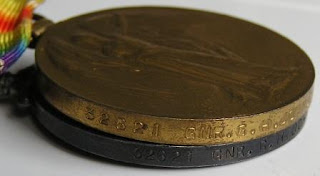 Posted by Lost Medals Australia at 12:31