The search for the family of 632 PTE William Henry Henley was one of the most difficult I've conducted (to access the service record follow the steps in this tutorial). Henley's British War Medal and Victory Medal came to me from the same source as the Maddock medals. Henley service record shows he was 18 years old when he enlisted with his parents consent as he was under 21. The hand written note signed by his mother agreeing to him enlisting is at the bottom of the first page of his service record. His enlistment date was 23 March 1915 and he was allocated to 24th Battalion. Henley transferred to 61st Battalion, 5th Battalion and 21st Battalion before returning to the 24th in September 1917. In October 1917 the 24th Battalion was fighting at Ypres and on 10 October Henley was killed in action.
Henley's service record makes interesting reading from a social sense. After his death there was little information provided to his family and the allotment made from his pay to his mother was ceased. This caused his sister to write to the Army asking for verification of his death so that a pension could be arranged. Henley's mother was in such financial distress that she had to sell her furniture to pay the rent. Henley's sister states in her letter that he was actually 17 when he enlisted not 18 and a half as indicated on the enlistment papers.
Henley had two sisters and one brother. One sister died shortly after being born. The other sister married but later divorced not having had any children. Her husband also served during WWI. Henley's brother served during both WWI and WWII. He married but also divorced without having had children. He was a bit of a rat bag and I came across several newspaper reports about his different court appearances. This was during the 1930 which might explain things. By the 1950s the Henley line had died out.
I couldn't work out if Henley's father had any siblings so I looked at the mother's line. Henley's mother was Henrietta Callow. She and her brother, William Callow, were born in Tasmania in the 1850s but later both moved to Victoria. William had seven children some of who died young or never married. One daughter, Laura, married Charles Watson. They had three sons. I found the wife of one of the sons (now deceased) but since she had married in to the family she thought it better that I talk with her niece from the Watson line who is the keeper of the family history. Today I spent quite some time talking to this lovely lady, now 80, about all the connections and her third cousin William Henley.
Once again thanks to Rod S who forwarded the medals to me and to Catherine who wanted the medals returned in the first place.
These medals are in as issued condition and unfortunately is a broken group. Henley was also entitled to the 1914-15 Star which is missing.
The returned medal tally is now 1128. 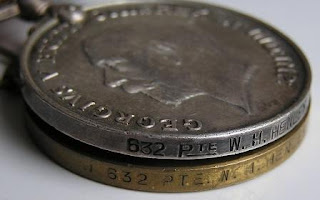 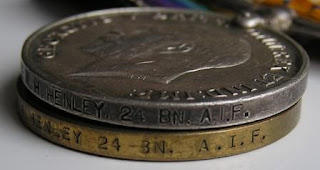 The BWM and the Victory Medal were issued some years apart, the BWM in 1921 and the Victory Medal in 1923. The variations in the naming is easy to see. I'm not sure if it because the impressing machines were wearing out or what but the 'W' and 'H' on the Victory Medal (the bottom one in the pictures) are struck so that the left hand leg of each letter is barely visible.
Posted by Lost Medals Australia at 15:02