Regular readers of our Blog will know that we often had to explain: ‘While we don’t yet have a photo of the medals, when one becomes available it will be immediately posted’.

With the current virus lock downs, the reductions in mail deliveries and security of mail in general, I have adopted, for the time being, a new approach. Where, in the past, I’ve had the medals mailed to me, I now leave the medals with the RSL/finder, research the family then put them in contact with the medal holder. These are two such stories

Keith served in Vietnam from the 24 April 1970 till the 29 October 1970. He passed away in 2009. Rather than a long search interrupted by time limitations on the Victorian Government BDM’s. It was here that War Graves came into the search and provided me the exact date of Keith’s death. The newspapers then provided me the names of the family and, above all, the name of the Funeral Directors as well as where Keith was buried.

Two phone calls later and Keeren, who had the medals, with the aid of Rob Brown OAM (President) and Glenda Marin (Secretary) of Cobram RSL, was able to start the process whereby Keith’s Vietnam Medal and the Republic of Vietnam Campaign Medal, were on their way to Keith’s son Shaun. As to where the medals had been since Keith applied for replacement medals in 1990, until they surfaced in 2019, is a mystery.

The return of Arthur’s medals owes much to Tina’s husband Kevin who found the medals in a shed nearly a decade ago, and Tina who kept the search going. Tina’s search was aided by the Team at the ‘Australian Surname Group’: GenieLiz, Huggable Montie, VTinOZ, Isobella, and Tree Fae.

Rather than write a story that will in no way show the contribution of these people who together were able to find Arthur’s son, now living in Darwin, here is the full story.

When I talked to Arthur’s son, he told me he lasts remembers seeing his father’s medals sometime before his mother died in 1989. 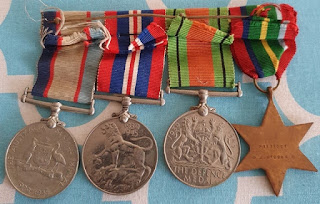 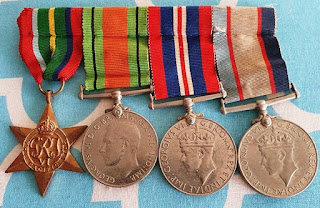 The returned medal tally is now 2573.

Posted by Lost Medals Australia at 15:48