Bill's success story this week is of three medals being returned to three families.

Well the story is not that old, but there was a time not so long ago when Militaria Auctions where medals were sold were quite frequent. Our story begins with one such auction in 2013.

To claim back one of her father’s medals (1939-1945 Star) Heather found herself having to bid for that medal but the problem being that her father’s medal was in a lot with three other 1939-1945 Stars.  A common practice, which pushed people to bid possibly more than they would if it was only one medal, and they found themselves bidding against someone who also wanted the medals. That she was successful was the beginning of this story.

Not knowing where to start she held on to the medals until she came into contact with ‘Henry M’. On her behalf Henry placed an advert in the DVA Vetaffairs newsletter ‘Lost and Found’ column. Sometime after which I was contacted by the RSL and asked if there was anything I could do to help Henry.

To say it was a different search is putting it mildly. Particularly after an initial search came up with no evidence that the four had ever served together. This would be the story all the way through the search.

As of Saturday morning, some 7 years since Heather purchased the medals of Richard, Joseph and Sydney; they are going home.

The returned medal tally is now 2552. 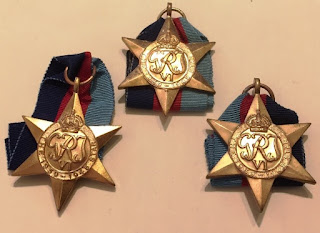 Posted by Lost Medals Australia at 12:55