A very poignant story from Bill about the return of a WWI Memorial Plaque.

Over the years I have been returning medals, and in particular Memorial Plaques, the one distinguishing characteristic of all the searches has been the youth of many of the recipients.

This magnified the loss experienced by the families, the parents in particular. Accordingly I have always deleted many details of the search for a next of kin. However, I cannot complete this story without mentioning Noel, who found the plaque so many decades ago, and never gave up looking.

And to Vicki, John’s great niece, and chronicler of the family’s history and who graciously provided the photo of John and his niece, which was taken just before his departure overseas.

John Chesters was 18 years and 7 months of age when he enlisted on the 15 July 1915. Having convinced his mother, because of his age, to sign his enlistment papers. He was 19 years, and seven months when he was Killed in Action on the 26 July 1916, at Pozieres. This was just 4 months after his arrival in France.

I will leave it to the Family Notices on page 13, of the ‘The Argus’ (Melbourne, Vic) Saturday 2 Sep 1916 to show how this effected the Chesters family.

‘Greater love hath no man than this-that he lay down his life for his friends’.
In heaven we will meet again.

(Inserted by his loving sister and brother-in- law, Mr. and Mrs. A. Withers.)

‘Loved by all who knew him.

We shall not stand beside his grave,

And none shall point us where he lies;

We only know that he was brave,

And faced the foe with smiling eyes.

By whispering ball or crushing shell,

No tidings comes of how he died,

But we who loved him know full well

He did not swerve or turn aside.’ 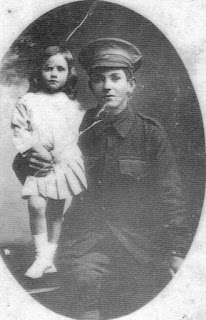 The returned medal tally is now 2561.

Posted by Lost Medals Australia at 10:20