This story from Bill really shows how WWI decimated some families.

The search for the family of these three brothers owes much to Alan Standford, the President of the Wyong RSL, who when the RSL received the medals, went looking for the next of kin. What is often remarked about Australia’s WW1 soldiers is their age. But rarely is there any comment about the number of brothers who served and paid the supreme sacrifice.

It was not until I read William Spencer’s service file and his statutory declaration of changing his name from Bottom to Spencer (his mother’s maiden name) that I realised I was looking at the medals of three brothers.

For the Bottom family WW1 was catastrophic. Of the three sons two were killed in action and the third died as a result of injuries received during the war. Their surviving siblings were all female of whom only four married, one thrice, which added to the compilations of this search.

It was not until I had started researching all five sisters and the walls I found along the way, that I was finally able to narrow my focus to their sister, Mary and her subsequent marriage to Walter, that I had at last a clear family line to follow.

The medals are today with the brothers great nephew, a former soldier who holds his father’s WW2 medals in safe keeping and who will now take charge of his Great Uncles medals.

Of all the notes I took during the search, which eventually totaled 23 pages, perhaps it was has been their mother’s death notice that stood out and has stayed in my memory. 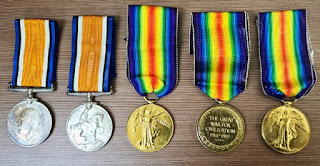 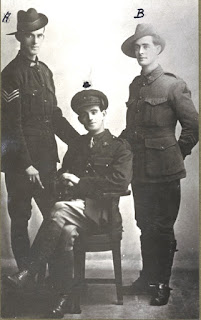 The caption of this photo of the Spencer/Bottom brothers reads:

The returned medal tally is now 2557.

Posted by Lost Medals Australia at 19:14