Lost medals turn up in the most surprising places. On this occasion three WWII medals awarded to VX113541 Gerald Mitchell Crawford were found in a locked shed during a clearance sale. I know that Gerald died in 2002 so it may be that the medals were in that shed since then or even longer.

Finding Gerald's family proved reasonably easy but the biggest hurdle was finding the contact details of his son, Fred. I knew that Fred had served in the RAN, however, had retired. Social media proved to be the solution and not long after I messaged Fred I had received a reply and all the pieces fell in place.

After the medals found they were handed to the Mt Gambier RSL. The sub-branch president, Bob S, then forwarded the medals to me and soon they will be in the post to Fred.

Thanks to Kim for facilitating contact between Bob and me and to the unknown person who handed Gerald's medals in to the Mt Gambier RSL.

The returned medal tally is now 2560. 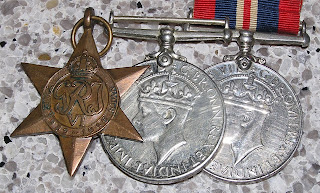 Posted by Lost Medals Australia at 09:27