Compared to many of the stories of returns that I have written of late, this is an extremely long story. But having followed it through, the more I thought of it the more I felt that I could not abridge it, through fairness to the family and more importantly to James.

Many of the stories in the Blog start with a complicated search via Military Records, Birth, Death and Marriages On Line Data bases, etc.  Occasionally the story just seems to roll, bringing together all those involved in the return, so the story becomes, not just the soldier but one of the family.

The story of the return of James’s Foley’s First World War Memorial Plaque is such a story, it began with Michael Hall. It is now over a decade since he saw the Plaque for sale in a shop, as he said when we first spoke “I felt it should not be for sale, it belonged with the soldier’s family”.

And so the story began. First with his service file, then the family tree, then luck, sheer blinding luck. While searching for a data base that showed information of First World War Veterans, and there are quite a few now. I came across the Victorian Government’s ANZAC Centenary web site. And there was the story of James written by his Great Niece Karen. As the web site is no longer maintained, I have added her story below:

Private James Leonard Foley was the son of Edward and Eliza Foley of Kew, Melbourne. He enlisted on 29 March 1915 and was killed-in-action in France on 24 August 1916 after service at Gallipoli Peninsula and France. He was 19 years old. His brother, John Henry Foley, also died of illness on 26 October 1917 in Netley, England after service in France, aged 26. James Foley is remembered with honour at Villers-Bretonneux Memorial. A very handsome young man who enlisted with his father’s written permission due to his age. He saw WWI as his duty to serve his country. His name was inscribed on a Roll of Honour at the Town of Kew in 1918.

Pte James (Sonny) Foley was my Great Uncle, the brother to my Grandfather Thomas Foley. Of the four Foley sons, two died as a result of WW1. William (Blunt), an older brother, died in his early twenties in a cart accident in Kew and my Grandfather was the only son that married. Coming from a family of 10 and with only one sister marrying and one son, we are a small family. The loss of two Foley boys in WWI was never forgotten and my Grandfather often spoke of his brothers and attended the ANZAC services every year. When moving back to Mooroopna on his retirement he just walked across the road to the Memorial. Sadness is my strongest thought on the Anzac Centenary on how many lives were lost and families who lost loved ones, always brings a tear. The photo of James Leonard Foley as a strong handsome young man lost to WWI is very sad and a reminder of how lucky we are to have freedom. We must always remember and thank these young men and women for the sacrifice they made. The Great War affected so many families.

With the web site closed down a new challenge began. It lasted all of ten minutes until I found Karen and the book she had co-authored. That in turn took me to ‘the family’. And Janine Stott, who co-ordinated the return. And who graciously provided me the photos displayed in this story.

I spoke earlier that this was a ‘family’ return.  From the two crosses, family members placed at the Villers- Bretonneux memorial, where his name is inscribed, one cross being for James, the other for his cousin Bill (William George Foley) who was killed in August 1916, during the Battle for Mouquet Farm. 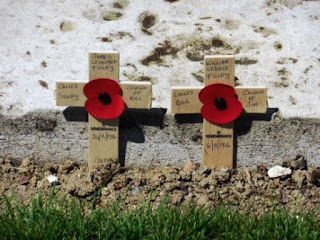 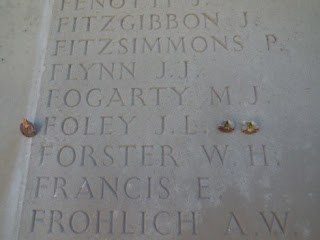 But the story does not end there nor did it end when the family received James’s Gallipoli Memorial Medallion, which had never been applied for. And like the respect shown by his family for his service and sacrifice I do not believe it will ever end. 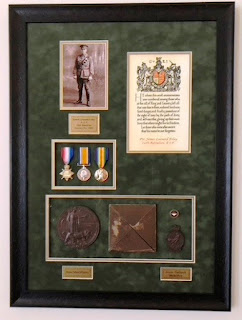 The returned medal tally is now 2563.
Posted by Lost Medals Australia at 11:21