This is the third of a series of stories from Bill on his recent successes.

The return of medals awarded to  VX23549 Thomas Kimpton really is a combination of three stories.

The first part is the theft of the medals in 1986 and the devastation of their loss. Something I was not to learn till only recently, when I spoke to Tom’s son.

The second part is that of the Secretary of an RSL and on whose behalf I had been helping to return medals that came to his notice as a Police Officer. It is now over five years since he approached me in regard to Tom’s medals, these having been ‘donated’ by a member to Eric’s RSL. The only problem he had at the time as he told me was that the ‘donor’ was ‘known’ to him in his employment.

The limit placed on me at the time and thinking back on all the medals I was ever asked by Eric to research, was twofold, confidentially and not to progress beyond finding either the recipient, or his next of kin. That was his responsibility. It is as a consequence of these two requests that this story along with many others has never been published on our Blog.

The third and final part began with Eric’s wife who rang me last year. She and her daughter were finally getting around to cleaning up his study, following his passing away in 2015.

Among many items was an envelope containing five medals, written on the envelope was my name, address at my RSL club and my phone number.

So first a quick check. Yes I still had the data I had given to Eric. But first on the agenda was to collect the medals. It would later transpire that on collecting the envelope, there were several envelopes, each containing medals, but they are stories for another day.

But back to Tom’s medals. Tom passed away in 1999, his wife Alice in 2006. A lot can happen in 12 years, an incredible amount of research can become out of date as people move, marry, remarry move again quickly. With the restriction’s currently in force here in Victoria, visits to the State library have been curtailed. So it was back finally to pencil and paper, and the phone book, courtesy of the Internet. Finally after several weeks, and a multitude of calls, I found Tom’s son.

My original plan to catch up with him and present him with his father’s medals, has been put on hold as a consequence of restrictions. Accordingly there is now a small parcel sitting on my desk, which will tomorrow be sent via registered mail to Tom’s son.

The returned medal tally is now 2537 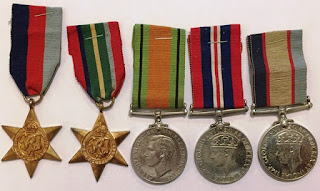 Posted by Lost Medals Australia at 10:10