This is the first of a series of stories from Bill on his recent successes.

Over the years that Glyn and I have been returning medals, the most commonly asked question, when we are researching a broken group, is; “do you think we will find the missing medals”? To which my answer has always been “I don’t know”. The story of the return of the medals of NX163072 Private Kevin Emanuel Chisholm, is one of the few occasions when the answer has been yes.

Loaned to an RSL some time ago, Kevin’s medals were just one of several groups that were in a box recently passed to Gary Eggert, Treasurer of the Engadine RSL Sub-Branch in the hope that he could return them. It is to Gary's credit that rather than passing them on, or letting them languish in a filing cabinet, he chose to reach out to find either the original recipients or their next of kin. It was how I became involved.

Rather than returning a single medal as is often the case we were now trying to return three, part of a broken group, comprising the Pacific Star, 1939-1945 War Medal, and the 1939-1945 Australian Service Medal. It was not until Gary returned the medals to Kevin’s grand-daughter Lisa, that he discovered the missing 1939-1945 Star. Lisa had asked the RSL holding the medals for their return some ten or so years ago. All that could be found was Kevin’s 1939-1945 Star, of the other medals there was no trace. This single medal was however forwarded to her at the time and she was left to wonder where the remaining medals could have gone. That is till last Friday when Gary met her to return her grand-father’s missing medals that all the medals were reunited.

The returned medal tally is now 2531. 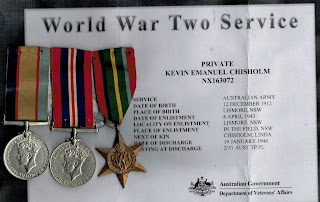