This is the second of a series of stories from Bill on his recent successes.

In the box that Gary Eggert the Treasurer of the Engadine RSL sent me was the 1939-1945 War medal of Corporal Leonard Bradish.

Shortly, Gary will be forwarding to Len’s daughters, their father’s 1939-1945 War Medal. Again, as so often in the past, there is no answer to the oft asked question “do you know where Dad’s other medals could be”? In this case it followed the statement “I never saw my father’s medals. He died when I was about 12”.

Out of respect to the family, the details of the search have been omitted from this story.

The returned medal tally is now 2532. 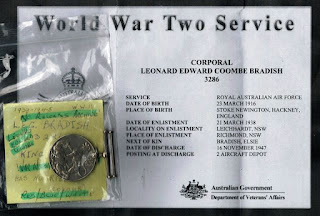 Posted by Lost Medals Australia at 09:56