This is Bill's latest success. Even though all the details can't be told, Bill has manage to weave a story which also shows the frustrations these searches can cause.

Ever thought of how many variations you can get in the spelling of a name? The return of Frank’s medals is in a way, a good but simple example.

It is over three years since his medals along with his Australian Legion of Ex-Servicemen and Women badge and Blood Donors badge, were discovered in a collection of clothing and household goods passed in to a Salvation Army Op-Shop’. And it is almost 18 months since I received them.

The search began as so many of our searches do, from  his entry in the Australian War Memorials WW2 Nominal Roll. Then to the Victorian, Births, Deaths and  Marriages, and here the first discrepancy arose. Frank’s AWM, and National Archives entries all showed him as having been born in 1919, the 16th February 1919 to be exact. But there was no entry for a Frank Edward REED in 1919 or 1920. Or even before, in the Victorian Government on line ‘Births, Deaths and Marriages’.

So did he put up his age to enlist, or put it down? Adding to the confusion was that there no details of Frank’s passing with Australian War Graves. Then it was to the newspapers looking for Funeral notices for a Frank Edward REED. But was this ‘our Frank’? To answer this question, it was necessary to develop a family tree and either fit Frank into it, or ‘it’ to Frank. First was to find his father, John and his marriage, well all of the men named John REED who had married in the 20 years before Frank’s supposed birth, in Country Victoria. Then came the plodding part. Looking at all of the John REEDs who had married in that time frame, and there were 15 who ‘fitted the bill’ as it were.

Then to look at children born to the couples. Quickly John Richard REED and Christina Ellen HICKINGBOTHAM stood out. Three of their children had been born in Yea, Victoria. It was in Yea that Frank’s records showed he had been born. But there was no Frank Edward REED born up till 1920, in Yea or anywhere else. It was then back almost to the beginning.

It was here I ‘discovered’ that a Frank Edward REID had been born in 1919 in Yea to a John and Christina REID, as had a Ronald Richard REID in 1917. Stepping aside as it were I followed up on both. It transpired that both Frank and his brother Ronald had married as ‘REED’, their father’s Surname. So why was the records never corrected? “Yes why”?

Sadly Frank’s wife had predeceased him, their only daughter dying three years later in 2005. So again then it was off at a tangent. If Frank and Mary’s house had been sold and it would have been after the death of their daughter. Who sold it? Enter  a ‘Good Fairy’ from a local real estate Agency, who handled the sale. Who took it on to contact the sellers.

Two weeks ago on my Saturday walk, I detoured to ‘Jenny’s’ and passed her Uncle Fred’s medals. I also left her with the responsibility to ensure that they would be passed on to the next generation to be kept in trust. The family may not be so lucky if they should be lost for a second time.

When I sat down with a friend recently, and detailed the search. Other than a “well done, Batman”. His main interest was that I had wandered all over the place in my search. I agreed. But with the current restrictions here in Victoria, many of the traditional research facilities are closed. The only option left was the ‘scatter gun’ approach. Searching on many fronts at the same time, waiting for results then attempting to draw those results into the one frame. But this is a path that must be followed if medals are to go back to the recipient’s family. And not just the easy option of anybody who knew the original recipient.

As for his other question “Well where have they been for 15 years”? All I could say was “Dunno Robin, dunno”. 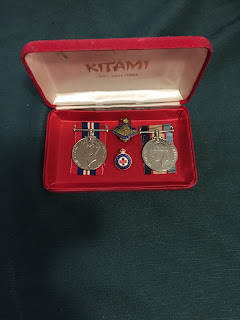 The returned medal tally is now 2526.

Posted by Lost Medals Australia at 17:34