Private ‘Donald’ owes the return of his Anniversary of National Service 1951-1972 medal to John Wells, President of the Dandenong-Cranbourne RSL, and his determination to return it. The first problem was that the medal still in its presentation case had been handed in anonymously, so there was no history of where and when it was found.

That would come later.

Having via, Electoral Rolls (before the lockdown) found Donald, his explanation of its loss and eventual discovery came to the fore. Initially, he could not remember when he lost the medal. It was when I asked him if it may have been while he was living in Tasmania many years ago. He then remembered. He had taken it to an evening Church meeting, where he showed it around. That was the last time he could remember having the medal.

It would later transpire that a secretary found the medal still in its presentation box at the back of a desk drawer. And then started the process by which the medal ended up with John Wells.

However even after the medal was returned to Donald, a question still remains. If he took it to the meeting in when he did, that is an awful long time for a medal, to sit in a drawer, even at the back, without someone trying to return it, at least until John Wells received it in 2019.

The returned medal tally is now 2539. 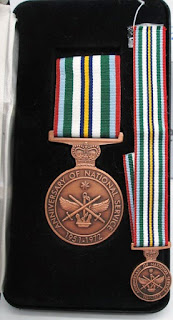 Posted by Lost Medals Australia at 10:38