A great story from Bill who had far more input in to the return that he has portrayed below. Well done Bill.

It never ceases to amaze me where medals turn up from. In the case of Cpl George Arnold Welsh’s 1939-1945 Australian Service Medal, it was found under the carpet of a second hand car that was being prepared for sale.

It will now take its rightful place in George's medal display replacing the replica that has filled in for it.

This return owes much to Mr Bahr one of the Trustees of the Australian Ex-Prisoners of War Memorial, Ballarat, to whom the medal was originally passed by the finder.

The returned medal tally is now 2524. 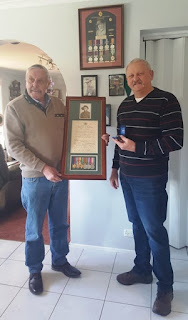 Posted by Lost Medals Australia at 13:11