Many of our searches begin with the Victorian Police Force. In the case of ‘Alfred’ it also ended with them.
His medals were found one Sunday afternoon on the road past the local tip. The finder who takes this walk regularly with his son, admitted he was quite surprised when his son came up to him and asked if the medals he had found on the side of the road were real. Indeed, they were. But it was Mum who cleaned them and then contacted the RSL seeking help to return them.
Slowly, and it has been a slow search, mainly because Alfred’s last listing in the electoral roll was before his young son was included. The complications continued when Alfred's wife remarried, and of course changed her name.
I finally got to the end of the search but at the request of Alfred’s son I have cut short describing the full search.
While Alfred's son is most appreciative to get his father’s medals it is almost matched by the excitement felt by the finder of these medals and whose mother cleaned them then sought our help.
The returned medal tally is now 2446. 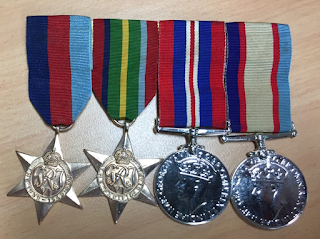 Posted by Lost Medals Australia at 18:23