This return is another result of revisiting an old case. It commenced in 2011 when I received the 1914-15 Star awarded to 131 Sapper Leslie William Powell who served in 1st Field Company, Engineers. 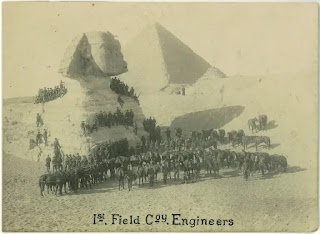 Leslie was born in Shepard's Bush, London. It is unclear exactly when he emigrated to Australia. He was a very early enlistee in to the AIF which is represented by his low Regimental Number, 131. His actual enlistment date is 15 September 1914 which was just five weeks after war was declared.
Leslie's 38 page service record is quite detailed about the administrative aspects of his service. It shows that he was 28 years old in 1914 and that he had served for three years in the British Army, Royal Engineers prior to leaving the UK. Leslie's time at Gallipoli was interspersed with periods of hospitalisation due to various diseases and other illness. Interestingly, he is listed as missing in August 1915 but I suspect that his admission to hospital was not known by his unit at the time. I checked the unit War Diary and no mention is made of this event. In late 1915 he was returned to Australia for a three month period of convalescence. By the end of 1916, Leslie was back in England and did a series of training courses before heading to the front in France. He was hospitalised on several more occasions as well as being charged for AWOL a couple of times. Leslie was finally discharged in 1920.
Leslie's service record names his sister, Kathleen Vera Powell, as his next of kin. Kathleen lived in Ealing, UK. This really didn't help searching for a relative in Australia which was quite confusing as there were quite a few people with exactly the same name. I found Leslie's death notice from 1954. Leslie died while a resident of the Narrabeen War Veterans Home. Using this information I was able to back track and piece together Leslie's life after WWI.
Leslie marred Amelia Harris in the late 1920s. The were both in the 40s and they didn't have any children. Amelia died in 1948. Leslie's sister Kathleen looked like my best option to follow but I couldn't find any records of her. I then turned to Amelia's family. She was one of eight children but as with so many families of that era, there were no further generations. I followed each of Amelia's siblings and by using a combination of birth, deaths and marriage records and death notices I could confirm that there were no children to six of the siblings. The only brother of Amelia's I couldn't completely rule out as having had children died in 1959. He died in Dubbo and the local paper isn't available online so I wrote to the editor of the paper asking if the paper had any records of this family but I didn't receive a reply.
In 2014 I revisited the search and nothing new about the Harris family emerged. I then turned to the Powell family in the UK. Leslie was the son of William and Augusta Powell but beyond that I found nothing.
Yesterday I did another search on Ancestry and found a recently published Powell family tree which included Leslie. What I didn't know previously was that Leslie had a brother. I've now been connected with this family and will send them Leslie's 1914-15 Star in the near future.
Leslie's medal was one of several groups that was sent to me by Diane F in 2011. All these medals came from a second hand store that she ran for many years and once the shop closed she thought the medals were best back with the family.
The returned medal tally is now 2451. 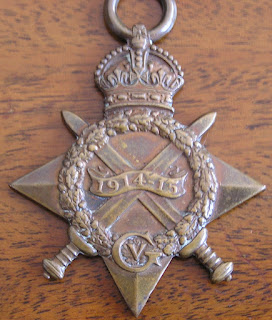 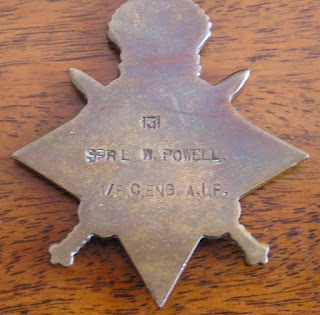 Posted by Lost Medals Australia at 09:53