Even though I have seen this so often when researching families, I am still amazed at the long term impacts from two world wars. This is yet another example of where a large family line ceased in two generations.
My research is of 413079 Flying Officer Alfred Charles Roland Flashman but I'm going to start this story with his grand father and show how quickly a family line can become extinct.
Alfred's grandfather was Charles Ordry Flashman. Charles, a brother and two sisters emigrated to Australia in the early 1860s. Charles was a teacher by profession and after time as a head master of several school in NSW he was appointed as an inspector of education. A position he held for many decades. 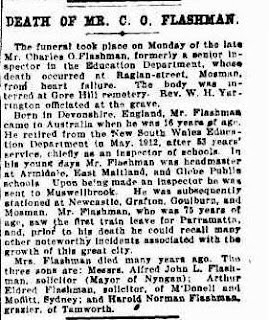 Of the four siblings in this family, the brother married but had no children, the sisters were spinsters. and Charles had three sons. The sons were; Harold Norman Flashman, a bachelor grazer near Tamworth, Alfred Eldred Flashman, a bachelor solicitor from Mosman and Alfred John Flashman a solicitor from Nyngan NSW. Alfred became the shire mayor as well.
Alfred and his wife Gladys had three children; a daughter Jen who died in 1923 aged six years, a son Bruce who died in 1948 having never married and Alfred.
Alfred joined the RAAF in 1941 and became a Lancaster pilot. He was part of the crew of Lancaster LM 324 which took part in a bombing mission on 15 June 1943 over Oberhausen, Germany. The aircraft was shot down and all the crew were KIA. This link is to the NAA file for the repatriation of Alfred's personal effects and also contains some of the correspondence to his father following confirmation of Alfred's death. The very last page mentions that Alfred was engaged to a Miss B Hooke of Toronto, Canada. A RAAF officer was dispatched to notify her of Alfred's death. This link to Canada most likely means that Alfred completed the Empire Air Training Scheme in Canada.
I found mention of Alfred's ill fated mission on another website and have added copy of the information and a picture of the aircraft at the bottom of this post.
Alfred is buried in Heverlee War Cemetery, 30km to the east of Brussels. 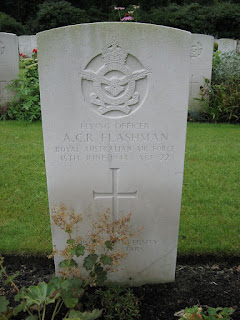 This branch of the Flashman family died out in just two generations so I have had to go back quite some way to find another line that is related. I'll soon send them Alfred's Australian Service Medal 1939-45. As can be seen in the pictures the medal disc has come away from the suspender which is how it came to be lost. 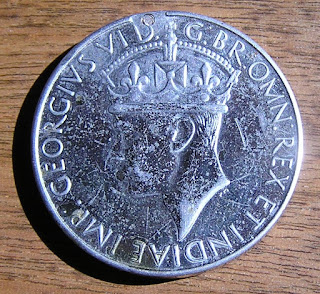 Another picture I found online was that of Alfred's uncle Arthur's headstone. 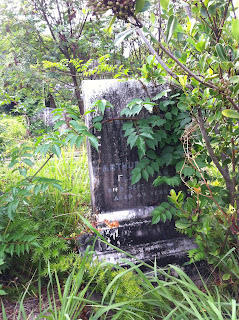 On Monday, 14 June 1943, (a part of) the aircraft of the 460 squadron (RAAF), took off for a mission to Oberhausen in Germany from a station (airfield) in or near Binbrook. One of the crew members was A14228 Flight Sergeant D P Birk RAAF. He departed for his mission at 22:54. He flew with a Avro Lancaster (type III, with serial LM324 and code UV-). His mission and of the other crew members was planned for Tuesday, 15 June 1943.
Posted by Lost Medals Australia at 14:58