I received the WWII British War medal awarded to William Best in March and ran into immediate brick walls. Yesterday, I decided to have a close look at Best to see what I could come up with and today the full story unravelled in my lap.
There is only one person with the surname Best who served in the MN and the only additional clue was that he received a British Empire Medal (Civil Division). That led me down a very interesting path. William was from Clydebank in Scotland and from an early age joined the merchant navy. His family moved to South Australia around 1925.
The first piece of information about the BEM was this entry from the London Gazette (click on the image for a larger view). 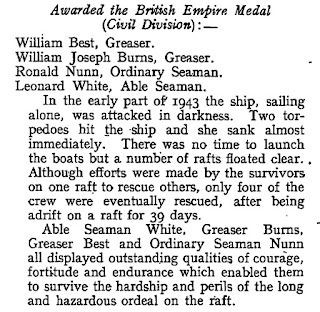 I then found the story of the MV Melbourne Star which was the vessel that William was on when he was attacked. This link has great details about the sinking. This is a picture of Bill in hospital after he was rescued and the story about his ordeal from the Adelaide Advertiser (click on the image for a larger view). 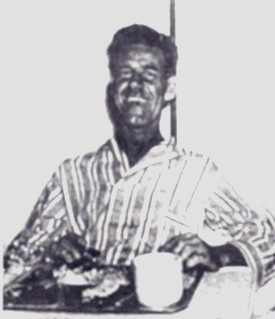 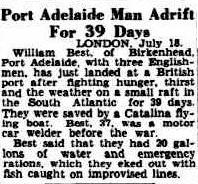 This story, also from the Adelaide Advertiser, gives much more detail about Bill's survival (click on the image for a larger view).

This card is from the AWM collection showing Bill's award of the BEM. What it gave me was his address and from there I could move forward with the research (click on the image for a larger view). 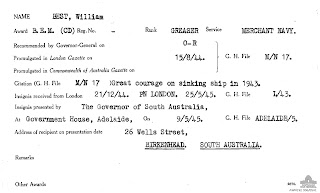 Unfortunately, the South Australian records are the least accessible of all Australian states so Bill and I asked the Australian Surname Group to have a look at this for us. Very quickly we had the names of Bill's siblings and their children. Based on this information I was able to then put together a family tree. One name was easy to research and as it turns out he was an officer in the Royal Australian Navy for many years. Through the electoral rolls I followed him through to 1980, including when he lived at an address about 400 m from where I lived in 1977. Once I had a name the rest was pretty easy and this afternoon I spoke to Bill's nephew, Ken.
Ken tells me that Bill married late in life but didn't have any children of his own. Even though Bill's medals were supposed to go to Ken this didn't occur but now the War Medal will be returned.

Thanks to Andrew C for sending the medal to me originally. The returned medal tally is now 1192.

Posted by Lost Medals Australia at 18:45