2568 Frederick Oswald Creek was initially allocated to 13th Battalion, AIF but within 9 months was transferred to 45th Battalion. His service record doesn't give much detail about exactly where he was other than he was killed in action on 7 August 1916. His body was never recovered and he is commemorated at the Villers-Bretonneux Memorial. 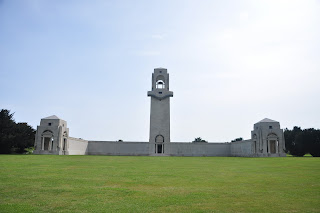 Frederick's picture is available on the AWM web site at this link.
The search for a relative started out quite well and I soon put together a family tree which included four brothers and three sister. Some of these siblings died young or never married. The next generation was easy enough to track but then most of the lines also died out. I came across several family trees on Ancestry but the relationship to Frederick was quite distant and I kept hitting brick walls. That was until this morning and thanks to a prompt by Bill, I found Frederick on a tree put together by Di Cole. Di is distantly related to the Creek family but she very generously provided me her research and the name of a lady who turned out to be Frederick's great niece. Once I had this name and a general location I took a few educated guesses and yet another punt and ended up speaking to Kaye, the great niece. I'll be sending Frederick's 1914-15 Star to Kaye in the near future.
Thank you to COL Ken Duncan (RL) of the Australian Water Transport Association RAE, AIF and RACT who sent the medals to me in the first instance.
The returned medal tally is now 1205. 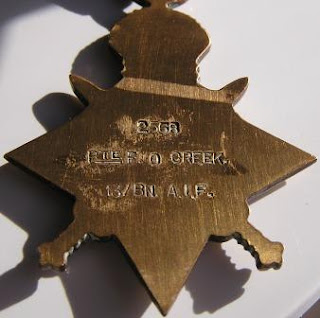 Posted by Lost Medals Australia at 18:24