As soon as I received this 1939-45 Star I knew it wasn't awarded to an Australian. It then took some time to work out it's origin.
I know it wasn't an Australian issue as the naming conventions were different to what I am familiar with. An Australian issued WWII star has the service details on two lines; the number on the top line and the initials and surname on the bottom. Also the naming is central on the reverse of the medal. This example, as can be seen in the photo, has the naming on three lines. It is spread apart on the reverse and is a different font and font size from the Australian naming. Also a check of the Australian WWII nominal roll showed that no one with this name served in the 2nd AIF, the RAN or the RAAF. I also know that is wasn't British as WWII medals were issued un-named.
So where to look? Morris C, my man in Brisbane, got stuck in to the research and narrowed down the family to South Africa. That was the key. Unfortunately, there is very little in the way of South African records available on line but I narrowed down Morris' initial research enough to work out the family emigrated from England to South Africa in the 1920s. The next proof I found was the publication in the London Gazette that 31434 LCPL Murish was Mentioned in Despatches. This confirmed that he served in the South African Forces but not much else.
It was finally through Ancestry that I was able to contact the family and the medal will be returned to them in the near future. Much thanks go to Morris for his tenacity to get the break through on this search .
The returned medal tally is now 1194. 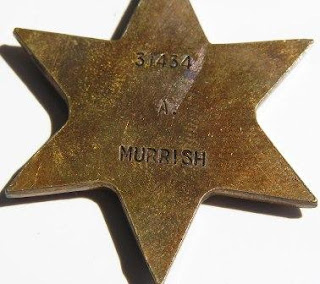 Posted by Lost Medals Australia at 15:53