This is a fascinating story which I'll let Bill tell.

'The Vaughan story began when I was approached by the President of a Melbourne RSL Sub-Branch. The Club had been given a collection of medals, the result of a collector deciding to pursue another hobby. The President, while willing to accept the medals, felt that there should an examination into how the medals came to be sold in the first, and so the story began.
Invariably when we ring a next of kin of the recipient of the medals we hold, and after having explained who and what we are doing, we are most often met with the comments "Dad's medals. They have been missing for years. Where did you find them?"
It is not unusual that as we pass through our research, we swing backwards and forwards, where we sometimes think we have taken not the expected two steps back, but rather we are back again at the beginning of our search. Often trying to work out how we got it wrong by proceeding down one path, when you probably should have ignored it altogether.
But never, until I started the search for the family of VF510178 Mildred Evaline Vaughan had I been met when calling with the words "What medals? Mum didn't have medals. Dad yes, but Mum no". Then the second question; "Where did you get them? The answer to that question is usually short, but the answer to; "How did you find me?" is the one that takes up the time.
So then came the first part of the answer explanation that Mildred had served during WW2 in the Army, and as such she was eligible for the War Medal and the Australian Service Medal 1939-1945.
The second part was a bit more complicated. Several years ago a medal collector tiring of collecting medals and having lost the enthusiasm for his hobby faced with the problems associated with selling his collection, gave them to a Melbourne RSL. An incoming President asked me if it would be possible to do an audit of the medals, in particular their background and where had they come from.
Perhaps the most pleasing part of the search was for it to end with a successful conclusion. A search that was began in March 2010 was completed this week when Mildred's medals were presented to her daughter Jane. 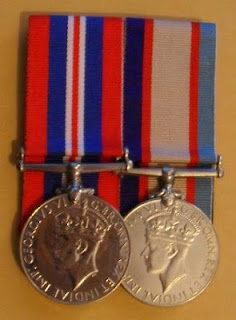 Mildred's family had a tradition of Military Service, her father Lieutenant Percy William Vaughan, served with the 1st Australian Service Squadron in South Africa during the Boer War from 1900 to 1901. During WW1 he was promoted to Lieutenant Colonel in charge of the defence of the Newcastle Port. 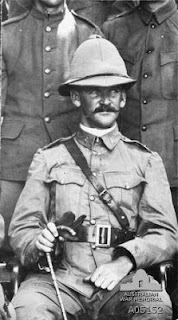 Source:  http://cas.awm.gov.au/item/A05152
Lieutenant Percy William Vaughan
Originally the Manager of City Bank, Braidwood, NSW, Percy received 5 bars to his Queen's South Africa Medal and was Mentioned in Despatches.
His son Kenneth Montague Vaughan served as a Captain during WW2.
His other daughter, Phyllis, married a Royal Naval Commander.
So it was in this tradition that Mildred joined the Army during WW2.
As for the search itself, well it took the assistance of the team at the Australian Surname Group and many many hours in the State library of Victoria, carefully trolling over old newspapers and electoral rolls. I followed the progress from Melbourne to Perth where Mildred met and married William Hudson in 1946. Mildred returned to Melbourne to live after the death of her husband.
But the question does remain where have the medals been all this time? And who had them court mounted. As I explained to Jane, I don't know and I guess we probably never will, but what is more important is that the medals are home with Mildred's family.'
The returned medal tally is now 1202.
Posted by Lost Medals Australia at 17:16