The British War Medal and the Victory Medal awarded to 101 LCPL Albert Ernest Walker are in as issued condition. They have never been mounted for wear and came to me with the original 90 year old ribbon.
Albert was 21 when he enlisted with the 40th Battalion, AIF. His service record shows that he was wounded in action in 1917 and then again on 31 August 1918. He died of his wounds on 1 September 1918, just two months before the end of the war. Albert is buried at Daours Communal Cemetery.
My search for Albert's family started by looking around the Lilydale area of Tasmania where Albert was from. A family tree on Ancestry gave me the married name of one of Albert's sisters. I found several people by this name in the White Pages in the area around Launceston, close to Lilydale, so I took a punt and ended up speaking to the daughter in law of Albert's sister. I'll return the medal to this family in the near future.
Thank you to COL Ken Duncan (RL) of the Australian Water Transport Association RAE, AIF and RACT who sent the medals to me in the first instance.
The returned medal tally is now 1196. 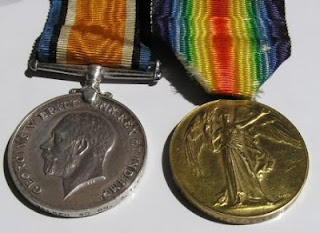 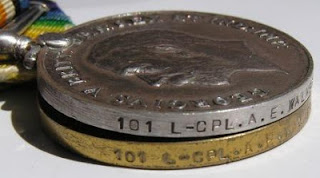 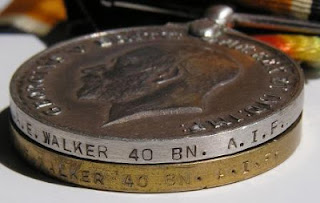 Posted by Lost Medals Australia at 15:13