WX3719 George Alfred Pittman was born in Ballancourt, France before his family settled in Western Australia. When George enlisted his profession is listed as school teacher and reference is made to in his service record. For his service in the Pacific George was Mentioned in Despatches.
Pictured are George's War Medal, Defence Medal and the ASM-1939-45. Missing are the 1939-45 Star, the Africa Star and the Pacific Star which George would also have received.
Thank you very much to Peter L who sent these medals to me last week and also to my friend MJ who was the initial go between.
These medals will soon be returned to George's daughter. The returned medal tally is now 1208.

Post update 11 Dec 12
I recently met George's daughter Sue so that I could return these medals personally. We spent a wonderful hour chatting about George and his exploits as a linguist during WWII. This photo is of Sue and I - and George - taken by Sue's husband Steve. Sue tells me that George's remaining medals are still with the family so the entire group will be reunited. 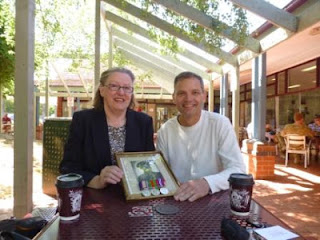 Posted by Lost Medals Australia at 07:46