PTE Hugh Norman Deady enlisted in in 1914 and was allocated to the 8th Battalion (to access the service record follow the steps in this tutorial). He was at Gallipoli in late April 1915 but there is no specific mention that he landed on 25th April. However, the battalion did partake in the landing so it is safe to assume that Deady was a first day lander.
Deady was wounded early in the campaign but the exact date is not recorded. Initially he was listed as Missing in Action but later this was revised to Wounded in Action. By 14 May 1915 he was aboard a hospital ship. Due to the wounds he received to his chest and abdomen he was classified as unfit to fight and reallocated to the Postal Corps.
The medal will be returned to Hugh's nephew how served in WWII as a RAAF navigator in Bomber Command. Thanks to Peter D who initially sent me this BWM. The returned medal tally is now 1132. 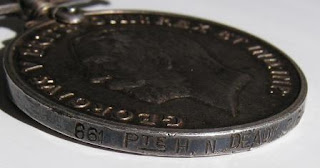 Posted by Lost Medals Australia at 13:00