We hear some very strange stories about where medals are found. These stories range from being left on a bar on Anzac Day to being tucked in to the rafters of an out building. This group awarded to N352481 Rex Reginald Simpson sits at the more unusual end of the spectrum.
The story goes like this: A council worker was mowing the highway verge near Calen, Queensland and saw a box in the grass. Usually this would have been run over but he noticed something shiny so stopped what he was doing and investigated. It turned out to be a set of medals.
Today, I spoke to Greg who is Rex's son. He tells me that his mother moved from Airlie Beach to Lismore and during the move a box of possession went missing. This box contained the medals and other personal items. Sadly Rex's wife died in the last few months.
Greg is having a bit of a run of luck with medals as he recently received his grand father's WWI medals from a cousin. My search for the Simpson family took me to the USA as I found a family tree originating from there which listed all of Rex's children. Alex, who owns the tree, provided me with some great information which unlocked the clue that led me to Greg.
Thank you to Kevin W from Calen who sent me the medals and to the workman who retrieved them.
The returned medal tally is now 1143. 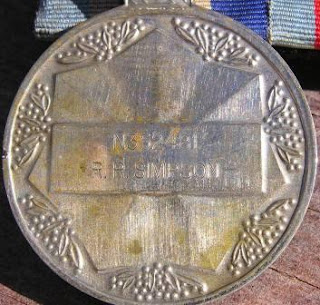 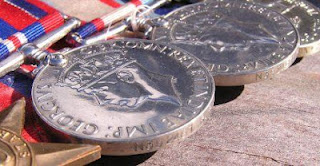 Posted by Lost Medals Australia at 13:13