I received the BWM awarded awarded to 238 Harold Wilfred Casey (to access the service record follow the steps in this tutorial) in yesterday's post and became very engrossed in searching for his family. After close to five hours of research I've located the family. Not the fastest bit of work but certainly rather quicker than average.
Harold was born in Bowral NSW, a lovely town which we often go through when travelling between Canberra and Sydney. He had two brothers and four sisters, however one brother died in 1896 aged 10. In the early 1900s he moved to WA with his parents, one brother and one sister. The remaining sisters stayed in NSW, they all married but I could find no evidence of them having had any children.
Harold was initially allocated to the 4th Machine Gun Company but later moved to 16th Battalion, AIF. Harold was killed in action on 4 February 1918. His brother George also served with 16th Battalion during WWI and was a POW of the Germans. He later served during WWII.
Harold's Will names his sister Eileen as his beneficiary but I had some trouble working out if she married. What confused me for a bit was that George's NOK during WWII was listed as T. Stapler. This sent me on a wild goose chase until I stumbled on a marriage in WA of an E. Casey to a T Staples. A bit of cross checking confirmed that the NOK on the WWII nominal roll was misspelt so it was the Staples family I was looking for. Once this was confirmed the search was straight forward. I found the names of Eileen and Thomas' Staples children and a browse of the White Pages offered two possibility. I took yet another punt and sure enough I ended up speaking to the right family. During this conversation I was able to confirm that George didn't have any children so there is no one of the Casey line left. The medal will be forwarded to the family in the near future.
Thanks to Rodney D who sent me the medal.
The returned medal tally is now 1144. 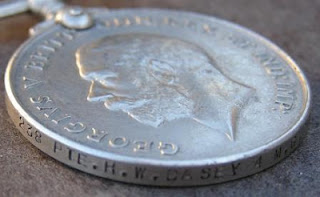 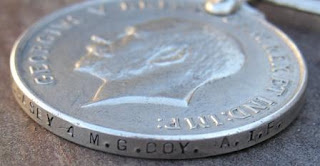 Posted by Lost Medals Australia at 14:57