One of the many contacts Lost Medals Australia has is with Australia War Graves who recently passed Bill's details to James Eastwood who was researching the lost medals  of VX4203 Fredrick Ernest Ellis. James had purchased the medals from a curio shop in Geelong. Today, with help from Bill, James had the distinctive honour and pleasure of speaking to Fredrick's daughter, Lynley. Bill says that finding Lynley was 'lucky' research but if you have followed our blog will know this is a euphemism for long hours at the State Library hunting through the newspaper archives and their old electoral rolls.
What is most important is that Fredrick's medals are going home. How the medals came to be in a coin and curio shop in Geelong is a question that none of us can answer. But as Bill said to both Lynley and James how they got there is not as important as James's generosity, his patience to see the search through and his trust that we would help him find Fred's family. Now after many travels a soldier's medals have 'come home'.
The returned medal tally is now 1138. 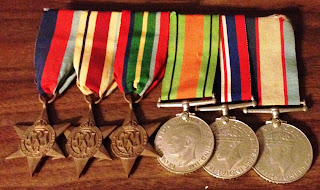 Posted by Lost Medals Australia at 12:29