The WWII medals awarded to NX114199 Matthew Robson have had an eventful life.
Matthew was originally from Wollongong. After the war he worked as a plumber and eventually settled in the Blue Mountains. After Matthew died, over 30 years ago, his possessions were collected up and consigned to the rubbish. On the way to the tip a bag of clothes fell off a trailer and were picked up by Cheryl who was following behind. Cheryl found the medals in the clothes and held on to them until forwarding them to me this year.
I was able to track down the names of Matthew's siblings and located a family tree on Ancestry. The tree owner knew little about Matthew but was able to provide the name of his son, Colin. All I could find on Colin Robson was that he died in 2006 and his death notice was published in the Armidale Express. I then sent a letter to the editor of this paper which was published on 1 Feb 12.
Today I have received information which has put me in touch with Colin's son, which of course is Matthew's grand son.
The medal returned tally is now 1069. 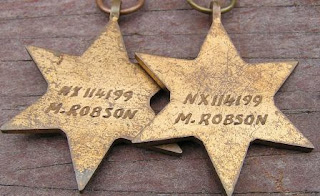 Posted by Lost Medals Australia at 13:05