6290 William St Clair Orr served in the 9th Battalion AIF having enlisted on 10 Jan 16. He left Australia in September 1916 and got in to a bit of trouble on the voyage and was charged with AWOL on two occasions. His troop ship arrived in England in mid December and William joined his battalion in France on New Years Day 1917.
The war diary shows that in early January the battalion was required to provide working parties and the entry for 5 Jan 17 says:
'8 casualties in one of our working parties of "semi trained" reinforcements, 5 being killed and 3 wounded.'
One of these was William who received gunshot wounds to his abdomen, legs and right hand. William died of his wounds later that day at the 3rd Field Ambulance.
William's came from a large family that was centred on Grafton NSW. His medal was sent to me by Liz J from northern NSW so the medal became lost up that way somehow. While there are still branches of the family around Grafton I was able to trace William's eldest brother's family to Sydney. William's Victory Medal will be returned to his great nephew.
The returned medal tally is now 1071. 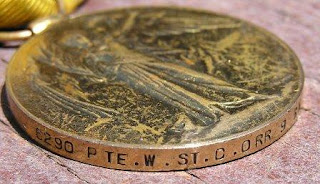 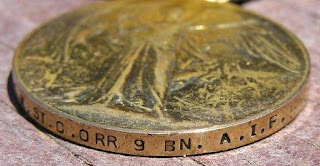 Posted by Lost Medals Australia at 13:49