Over the years we have had only a small number of medals awarded to females come to us. This war medal was awarded to WF57093 Bertha Florence Corkery who was originally from WA before marrying and moving to Boorowa NSW.
Boorowa is a smallish country town but there was a large Corkery family there. Ancestry provided most of the clues to track Bertha and several family trees for this family have been published. I sent a message to the tree owners and today I was contacted by Bertha's grand daughter, Jess. I was rather pleased with this bit of research as I only received the medal yesterday. Even more pleasing was to find out that Jess lives in the next suburb from me and she came straight over to collect the medal.
Along with the picture of Bertha's medal is a copy of the news paper photo from her wedding.
Well done to LTCOL Mick C who sent the medal to me.
The returned medal tally is now 1074. 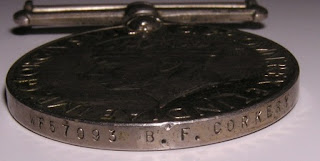 Posted by Lost Medals Australia at 15:48