This post was updated on 12 May 15. Please scroll to the bottom.

This particular search has been typical of many that we do. We often get a lot of information initially that seems to be leading us to an easy result. However, as is often the case, we end up getting to a point where all the information seems to dry up.
I received the BWM awarded to Lieutenant Robert John Adams in Feb 09 and there is a fair amount of information about him and his early life in Tasmania. All the leads I had dried up in about in the mid 1920s. Tim has had a fresh look at this case and has had a wonderful bit of success. Here is what Tim has put together.

Robert John Adams emigrated from the Ditton, Lancashire with his wife Leah to Tasmania prior to WW1. They appear to have separated in Hobart around the start of the war, with three children (Robert, Leah and Trixie), being left in the care of a Mrs Fitzpatrick. Robert was a Boer War veteran and former British Army RAMC regular serving 4 years with the colours and 8 in the reserve.
Robert somehow made it to Townsville and enlisted there in March 1915, initially serving with the 4th Light Horse Brigade Field Ambulance, being transferred to the 15th Field Ambulance in March 1916 in Egypt. He then served in France/Flanders being commissioned to LT from LCPL at the end of the war. His service papers and an allotment file explain the situation with his children and wife.
When he got home to Tasmania after the war Robert and Leah divorced (Hobart Mercury article July 1924). He subsequently married a lady named Revie and they had children named Jan, Roberta, Robin, Jill and Simon. He served on as a CPL in WW2, reducing his age by 8 years. Robert appears to have copped a few mentions in the paper over the years, including one in which Revie was injured in a traffic accident.
Robert died on 21 November 1953 and this time was living at Windsor St, Kingston Beach, Hobart. In the notice of death in the Hobart Mercury his family members were listed, including his daughter Leah who was by then married with the surname Uhr-Henry.

This is the information that Tim used to track down Leah's son David who is now living in Victoria. The medal was sent to me by the Directorate of Honours and Awards after it was initially handed in by Adrian N of Hornsby.
The returned medal tally is now 1079.

Post update 12 May 15.
Yesterday I received a very unexpected email from Marg Powell of the John Oxley Library. As part of her research in to the library's collecting she came across this story about Robert Adam. In the collection is a picture of Robert taken in Cairo. How amazing that this picture is connected to this story. I've provided Marg with the family's contact details so that they can also see this photo. The library's WWI blog is at this address. 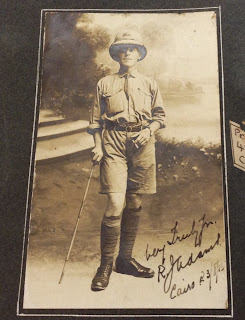