I received this British War Medal in 2007 from the Queensland RSL after it was handed in. It was awarded to 6519 PTE Matthew Abbott who served in the 25th Battalion, AIF.  Matthew's next of kin were his parents Matthew Snr and Harriet Louisa Abbott of Gympie Road, Kedron. Matthew had two brothers named Arthur and 3755 Lance Corporal Frank Abbott, also of the 25th Battalion. Frank was killed in action at Zonnenbeke, Belgium, on 31 October 1917. Matthew senior passed away in 1939. We also know that Matthew had no children of his own as he never married.

Arthur Abbott married Sarah Bowley who was known in the family as Myrtle. Myrtle had a nephew named Gordon whose mother died when he was young and he was raised by Arthur and Myrtle.
Gordon's father, Cyril served with the 26th Battalion in WW1 and there is a photo of him in the Queenslander from June 1915 (reproduced here).

Tim has done some great research on the back of the initial work done by Bill to finalise this search. The medal will be returned to Gordon's daughter who is Arthur and Myrtle's grand niece.
The medal returned tally is now 1078. 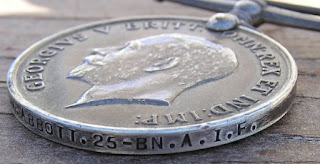 Posted by Lost Medals Australia at 12:28