The parcel that was sent to me that contained the Robson medals also had a single 1939-45 ASM awarded to NX115779 Brian Thomas Birrell. I took about an hour to trace the family through the Electoral Rolls and the Ryerson Index and I have just spoken to Brian's wife.
How the medal was first lost and then put with the Robson medals is anyone's guess. Mrs Birrell tells me that she has been looking for this medal for years as she has the rest of Brian's group. Not only is the medal being returned to the family it is being reunited with the others awarded to this soldier.
The medal returned tally is now 1070. 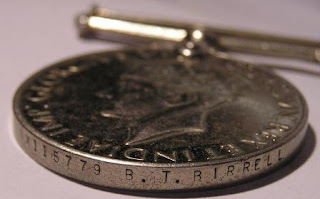 Posted by Lost Medals Australia at 16:58