756 Allan Douglas MacDonald was 19 years old when he enlisted in the AIF on 11 January 1915. His widowed mother lived in Kinglake, Victoria, and had to provide written permission for him to enlist. This note can be found on page 20 of the service record. Allan's mother later moved to Whittlesea, Victoria. He was allocated to 22nd Battalion, AIF.
Allan seems to have had a little bit of trouble with authority and was charged a number of times for failing to obey an order and failing to return from leave. He also saw a fair bit of fighting. In June 1916 he received a gun shot wound to his right hip for which he was hospitalised and spent time in England. Allan was wounded a second time on 19 September 1917, this time the wound was to his head and lower jaw. He didn't recover and died of his wounds later that day.
Allen is buried in Lijssenthoek Military Cemetery in the Ypres Salient. 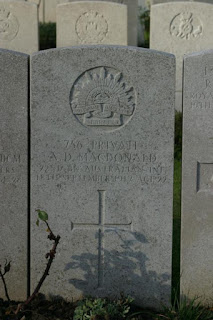 I had a bit of difficulty following Allan's mother,. but in his service record there is one reference to his brother, Keith Colin MacDonald. Keith went on to serve in WWII. This link it to a photo which includes Keith in New Guinea.
I recently reviewed the search for Allan's family and came across a new Ancestry family tree. As a result I've now been in contact with a relative of Allan's who I'll return the medal to. They still live in Whittlesea so the medal is going full circle.
Allan's Victory Medal has had a tough life. It is well worn and the impressed naming is difficult to read. The medal condition can be seen in these photos.
Thanks to Vicki D who sent me the medal in 2014.
The returned medal tally is now 2471.
Posted by Lost Medals Australia at 09:35