This National Medal came to me from a surprising new contact, the Honours and Awards Secretariat at Government House. It is a pleasure to provide assistance to Vince.
The medal was awarded to Len Thomas. From Commonwealth Gazette entries I knew that Len was an Army Reserve Sergeant in the Royal Australian Artillery and that he received the Efficiency Medal in 1968. From this I could roughly work out that Len enlisted 1953 and was, therefore, born around 1935.
The only other information I found out about Len was five electoral roll entries from 1958 to 1980. After that I could find nothing so I started to think that Len might be dead. I put out a call for help on the Australian Genealogy face book page and with in minutes I had a message from Nicole (who has helped me in the past) to let me know that Len is still alive and his phone number.
I've now spoken to Len who told me that he was called up for National Service in 1955, was posted to an Air Defence unit from 1956 to 1972 and then to 23 Field Regiment, RAA, until he discharged in 1980.
The returned medal tally is now 2470. 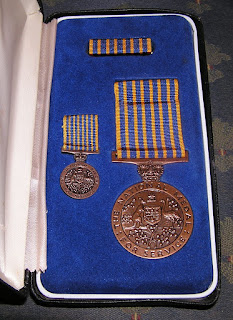 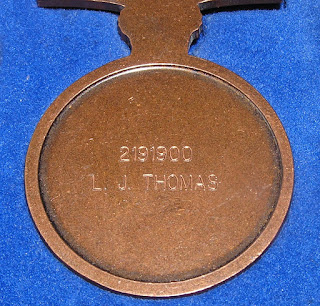 Posted by Lost Medals Australia at 16:02