The search for 4907 Patrick James Fendlen of the 53rd Battalion, AIF, started with an email from Terry M who had come across Patrick's British War Medal amongst his father's WWII medals.
The search for Patrick was some what difficult as his name was sometimes spelt with an 'i' in place of the second 'e'. Once I worked out that he lied about his age to enlist the pieces started to fall in to place.
He was born in 1870 making him 44 when he enlisted but stated his age as 34. He was married to Rachel but this was her second marriage and she already had four children. Rachel died while Patrick was still serving in France although he was returned to Australia for health reasons not long after.
In Patrick's service record there is a letter from his brother saying that there was no children from the marriage to Rachel and I couldn't find any connection between Patrick and Rachel's children after she died.
Patrick later married Mary Sayer, however, that marriage didn't last long as in 1920 a warrant was issued for Patrick's arrest for the desertion of Mary. The warrant gave his age as 54 which verified my calculations about him lying about  his age on enlistment. Patrick spent time in Darlinghurst prison and died in 1937.
I've tracked down a distant relative who is also the family historian and he will hold the medal until a closer relative is found if this is possible.
It was great to connect Terry and Wayne about Patrick's medal and provide them both with addition details about Patrick. Although, how his medal came in to Terry's father's possession remains a mystery.
The returned medal tally is now 2236. 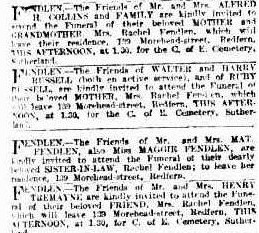 Posted by Lost Medals Australia at 00:05