Bill and I get numerous requests to find medals that have been lost for many years or known to have been sold in the past. This is an almost impossible task. However, Bill has achieved the impossible.

For those of you who follow this Blog, you would be quite used to Glyn and I receiving medals then going looking for either, the recipient, or a next of kin. This story goes the other way.
It is a story that has been two years in the making and it came in two parts; this is part 2.
If I take you back to 1st July 2016 and the story of the search for the Death Plaque of 1707 Pte Cyril David Jones, who was Killed in Action at Fromelles on the 20 July 1916, I introduced you to Lee his great niece and her search for the plaque and medals of her great Uncle.
This is the continuation of that story. When I returned the plaque to Lee, her final words, after her profuse thanks, were of the order: ‘do you think you’ll ever find the medals?” My answer, the only one I could honestly give her, was “I don’t know, I just don’t know”.
However, I added Cyril’s name to my weekend Internet search roster.
Shortly after returning Cyril’s Plaque, I was approached by the new memorabilia officer of the RSL Club that had been given Cyril’s plaque and medals in 1972. He asked me would I complete the lists that I had started on several years before, a request to which I agreed. This was for two reasons, the first that I had no luck blind searching on the internet. Secondly it allowed me to search much more thoroughly the club and its environs than I had before.
My first step was to make up a list of any and all of the retirement homes within a 5 Km radius of the club, homes whether they were associated with the RSL or not, but where someone from the club may have in the past set up a display. Then came the follow on phone calls, to which the answers varied from “No we have no RSL stuff here” to “Yes, we do”. It soon appeared that at some time in the past, the club’s previous memorabilia officer had a very large list of homes that he and his wife would regularly visit changing over the display to match up with various military campaigns that Australian forces had been involved in. Usually the comments received digressed to the fact that he had not been for quite some time, almost two years, in fact, which aligned with his passing.  And so started my visit program.
It is now two weeks since I rang Lee, asked her to sit down, and told her I had found Cyril’s medals. They were in a plastic shopping bag at the back of a display cabinet. Last Saturday I had the privilege of returning Cyril’s medals to his family.

This has, as I said above, been along search, nearly two years in fact. I do not think I would ever like to do it again. If Cyril had not been one of the fallen at Fromelles, had I not got involved in the search for the NOK of the fallen, met Sandra Playle and Tim Lycett and some truly fine Australians, I don’t know if I would have had the determination to keep going.

Sandra and Tim have been friends of mine for many years, this is another wonderful connection to the amazing research they have done.
The returned medal tally is now 2240. 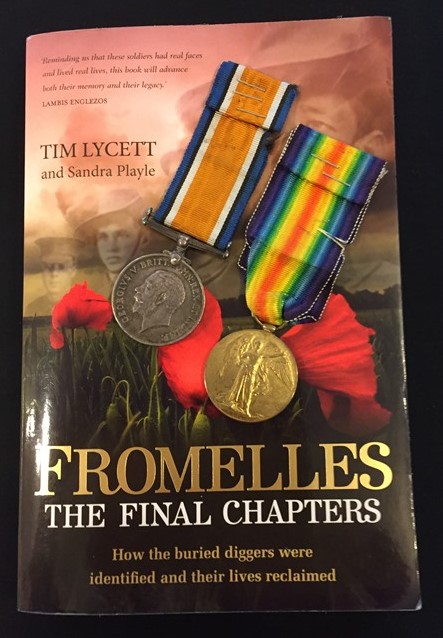 Posted by Lost Medals Australia at 01:49