This search started with an email from LCDR Tim C from the Royal Australian Navy who had received the Australian Service Medal 1939-45 awarded to 19669 Henry Norman Agnew, RAN. The circumstances how Tim received the medal was slightly strange but I have heard similar stories before.
The medal was sent to Tim by the daughter of Norman Andrew Agnew who had found Henry's medal mixed in with Norman's medals. Very kindly, she wanted to see Henry's medal with the right family. It is easy to see how the mix up occurred when the medals were originally dispatched. Although, I do wonder where Norman's ASM is?
The search for Henry's family proved rather tricky. There were only a few mentions of Henry in public records. These include his WWII RAN service card, which really provided no usable information, a date of death and two electoral roll entries. From the electoral roll I knew he lived in Gundagai in the late 1950s and his wife was Victoria Gladys Agnew. I found Victoria's headstone which confirmed she died in 1990 and with no children mentioned I had to assume there was no direct descendant.
It was the link to Gundagai that cracked this search open. The NSW BDM entry for Henry's death in Gundagai gave me his parent's names, Albert Frederick and Amelia Elizabeth. Using this data in the births search page I found the name of Henry's sister, Bronwen. After that is was easy. Albert, Amelia and Bronwen appear in an Ancestry family tree owned by Bronwen's grandson Gary. This makes Gary, Henry's great nephew.
I've now connected Tim and Gary and the medal will soon be returned to Henry's family.
The returned medal tally is now 2235. 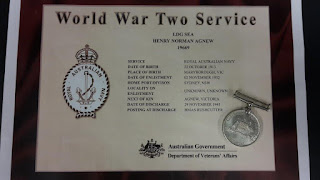 Posted by Lost Medals Australia at 01:44