There are few things better than resolving one of these searches on Anzac Day.
Once I started researching 1191 Angus Graham Gilmore it soon became apparent that I had come across not only a high achieving individual but an exceptionally high achieving family.
Angus' medal gave me the first challenge as it is impressed with his unit 1 ASH. A little bell of familiarity was ringing and I soon realised that Scott had a deep interest in the 1st Australian Stationary Hospital.
As soon as I looked at Angus' family the significance of this family to South Australian and Australian history became apparent. Angus' father was Hugh Gilmore who was the Primate Methodist Minister in South Australia in the late 19th century. His large family went on to make a significant contribution to society.
Angus was the Assistant Deputy Commissioner of Repatriation in Victoria. Numerous contemporary newspaper articles speak of his fair approach to this position as he dealt with fellow veterans.
His son Hugh Graham Gilmore was a dental surgeon who served in the RAAF during WWII. Unfortunately, Hugh didn't have any children so that line of research ceased. I might also point out that this family used various combinations of the names 'Hugh', 'Graham' and 'Gilmore' across several generation which caused a bit of confusion.
Angus was one of eight children so there was several lines for me to move on to. One brother, Edwin Collin Gilmore was a marine engineer whose son, Hugh Robert Gilmore, was a distinguished physician.
If those accomplished relatives aren't enough, Angus' sister Louisa was the matriarch of probably the most notable branch of this family. Louisa married Alfred Maegraith and three of their children need mention.
Brian Gilmore Maegraith was also a doctor who specialised in tropical medicine.
Kerwin Lovell Gilmore Maegraith was a noted cartoonist who worked for newspapers around the world.
Hugh Gilmore Maegraith was awarded the Military Cross during WWI and also served in WWII.
It is through Hugh Robert Gilmore's line that I've been able to locate Angus' niece Flora. I must thank Angus 'great niece Kate for putting the final piece in place for me. Thanks also to Jeanette W who contacted me following the recent Sunrise program and wanted this medal returned to the family.

The returned medal tally is now 2079.

This is a self portrait of Kerwin. 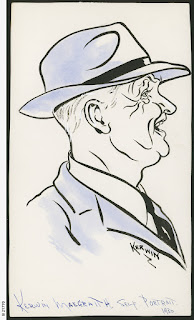 Posted by Lost Medals Australia at 19:36