This is another of Bill's ‘Watch this space’ or should that be ‘where have they been?' stories.
It is over 20 years since the medals awarded to 133548 LAC Neil George Crump were stolen. This Anzac Day it will be two years since the medals were passed to George Cook, past President of Northfield RSL, and a year since George passed the medals to the State RSL branch in Adelaide.
While I could tell all this to Helen, Neil’s daughter, what I could not explain was where the medals had been since they were stolen until they were discovered in a paddock in Adelaide. To tell the truth, I don’t think Helen really cares. The fact that the medals had been found was enough. Unfortunately, Neil’s Pacific Star was not among the medals that were recovered.
George and the RSL State branch had advertised widely from Bendigo, where Neil was born, to NSW where he enlisted in 1943 and where he lived after discharge, it was all to no avail. The difference to us finding Helen, I explained to George, is that it is not just our experience but that Glyn and I have an incredible group people like Kerrie to fall back on and who assist us. 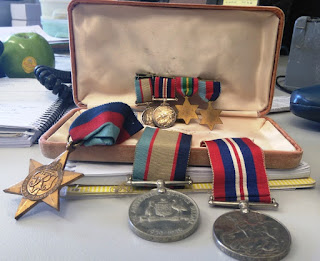 Posted by Lost Medals Australia at 13:06