Enlisting under an alias was quite common during WWI. This is a story where Bill had to untangle the story behind a soldier who enlisted under one name then changed back to his real name.

The search to return the BWM of Pte George Golding/Pte Ernest Albert StewartRegimental No.4572 has been successful in that his British War Medal was returned to his family. However, I still found myself at the end of the search, wondering who was George Golding? Additionally, how did Ernest manage to join up? According to his service file, he was 18 years and 1 month when he enlisted on the 10th September 1915, when the birth records show he was born in 1901. This would have made him 16 years of age when he took part in his battalion’s first major offensive around Pozieres and Mouquet Farm in July and August 1917. Ernest was also with his unit, the 24th battalion, which took part in the second battle of Bullecourt in 1915. Even though the battalion was involved for only a single day, it suffered almost 80 per cent casualties.
5 months later, in October 1917, Ernest was Wounded in Action during the seizure of Broodseinde Ridge. Ernest never fully recovered and this lead to his untimely death at the age of 52 in 1953.
While I was able to put together a family tree which showed Ernest and his wife Eleanor they had no children. All the other links that I was able to piece together petered out in the 1970s. It was the team at Australian Genealogy Surname Group that was able find a small family tree that included Ernest.
On 24th of March I was able to post off Ernest’s BWM and shortly thereafter receive the following from Stephanie, Ernest’s great niece:
‘Hi Bill, we received the medal yesterday. Here's a photo of Nan with it. It brought her to tears and she was very excited. Thank you so much for getting in contact with us we really appreciate it.
Kind regards,
Steph’
As you can see the edge has over the years suffered. It was only that Ernest’s Service number 4572 and his Battalion the 24th were still visible that allowed us to return the medal.

The returned medal tally is now 2059. 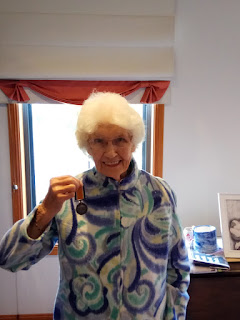 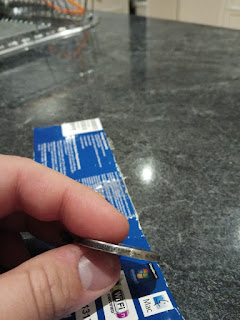 Posted by Lost Medals Australia at 13:17