This is one of those searches which took many hours to complete. It was incredibly frustrating and at times I thought impossible to finalise.
The information about Leslie David Dennard's early years was relatively easy to piece together but it is the later years and linking him to a current generation of this family is what has proved difficult.
Leslie was born in Ceylon in 1897. He attended a public school in England until WWI when he enlisted in the Royal Army Medical Corps. Following WWI he studied medicine at the University of Dublin and married Roslin Meta Louise Hett. In the early 1930s, Dr Dennard became a colonial medical office in Africa but something when wrong, Roslin and their son died in 1932.
By 1938 Leslie had remarried and was traveling to India as a doctor. With the out break of WWII, Leslie became a medical officer in the Royal Army Medical Corps. He was promoted from Lieutenant to Major over the course of the war.
The records show that through the 1950s and '60s he practiced in the Bolton area of the UK before dying in 1968. Other then the son who died as an infant I could not find any evidence that Leslie had other children. I then looked at his siblings. He had at least two sisters. One, Susan, became a widow as the result of WWI and she drew a military pension. The other, Katherine, was the Executrix of Susan's estate but I just couldn't find anything further about her other than her married name of Marks.
Looking back at my notes I must have spent at least 30 hours on and off with this search since I started in May 2014 when Leslie's identity bracelet was sent to me by Len Clarke. Len found the bracelet in his late father's belongings but is not sure how his father came upon it. A recent review of this search that led me to a tree on Ancestry which included Leslie. That's when all the threads of this search came together and I'll be able to send this bracelet back to the UK in the near future.
The returned medal tally is now 2078. 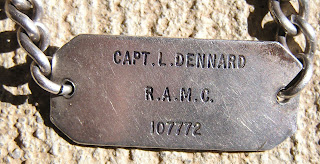 Posted by Lost Medals Australia at 17:01