VX17037 John James Stanley had two periods of service for WWII. He enlisted first in May 1940 and was discharged in November 1941. He then enlisted again from March to May 1942. I'm not sure why the periods of enlistment were so short but for this usually indicates some form of illness.
The bigger event in John's life occurred in 1953 when his wife, Ada, was killed. Adda was in a car with three others that was hit by a trail at a rail cross. All four died. John and Ada had a baby daughter. The story from the local paper is below.
The medals were sent to me by Ian F of South Australia. The search for John's family was an easy one as his grand daughter, Michele, has posted a comprehensive family tree on Ancestry. I'm not sure if I can get these medals back to Michele by Anzac Day 2017 but her family will now have them for the future.
The returned medal tally is now 2077 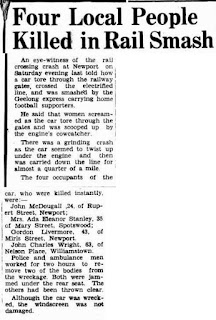 Posted by Lost Medals Australia at 13:15