When I first received the British War Medal awarded to 3515 Wyndham John Baker I thought that the search would be reasonably easy given his unusual first name. I quickly found the basic information from his service record and his addresses via the electoral rolls. We even got as far as following his great grand son to Perth where he died in 2006. What we couldn't find was a living relative despite Wyndham and his wife Alice having two children who we know married and had children of their own. The whole research team has had a look at this one and today I revisited the collective research and finally tracked down Wyndham's great great grand son.
What we know about Wyndham is that he served in 31st Battalion, however, he put his age at 42 when he enlisted although he was closer to 50. After the war he was a farmer. His son Francis was a police officer and his daughter Winifred married where the family lived near Crow's Nest QLD. It is through Winfired's line that I've contacted Wyndham's great great grand son and I now have the contact details of one of Winifred's sons who I will return the medal to.
Wyndham's medal was found by Janet E who passed to Lloyd B who works for the Department of Defence and he then forwarded the medal to me. Thank you to both these links who are part of returning this medal.
The medal returned tally is now 1220. 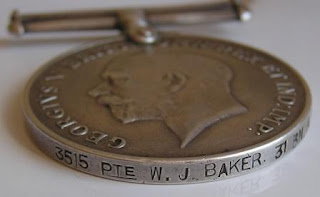 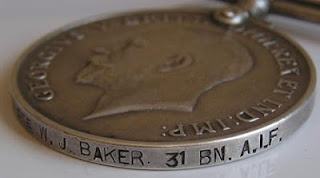 Posted by Lost Medals Australia at 17:37