I received the dog tags worn by 120699 Hugh Stewart MacGlashan recently from my friend Sandra Playle who runs Vision Research Services. With such an uncommon name I thought this would be a straight forward search. Hugh was an only child but his father had six siblings. Each one I researched proved to have either not married or had no children. However, the family did seem to be concentrated around Brighton, Victoria. Hugh lived in this area for some years but he also moved around Victoria as a priest. I did track down a few newspaper articles about Hugh from the 1950 including this picture and notice of his engagement. One of Hugh's cousins, Neil MacGlashan also served in WWII and I found that he died in 2011. While I could find Neil's son's name I just couldn't locate an address so then I went off in search of Neil's grand son, Alistair.
I found a person by this name in Chicago USA and he was involved with the USA AFL competition. An educated guess told me I had the right fellow. I have since been in touch with Alistair who is at home in Melbourne on a visit for Christmas so I'll post him the dog tags next week.
The engraving is not very deep which has made taking a reasonable photo difficult. 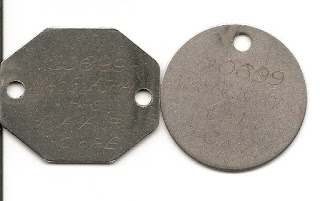 Posted by Lost Medals Australia at 11:15