My search for the family of NX65239 Joseph Patrick Daly took me almost as far as this man travelled in his life. When Joseph enlisted for WWII he gave his year of birth as 1902. As it transpired he was born in 1898 but adjusting a date of birth was not uncommon during this period. The only other solid evidence I had for Joseph was that he was born in Ireland and where he was located on enlistment. This was enough to pin him down in 1937 from the electoral rolls.
I haven't been able to verify it exactly but I suspect that Joseph left Ireland for Australia in the late 1920s or early 30s. During WWII Joseph served with HQ 22 Bde and was taken prisoner in Malaya.
After WWII Joseph moved to Far North Queensland and I was able to follow him through a succession of boarding houses until he finally settled in Townsville. The last address I have for him was in Palmer St Townsville which I know very well. It is now a popular cafe and restaurant strip but up until about 15 years ago it was a street best avoided. I remember it from my first posting to Townsville and its close proximity to the Townsville wharf meant it was a rough part of town. Many boarding houses lined Palmer St but most have now been knocked down to make room for hotels or renovated into flash backpacker accommodation.
The trail back to Joseph's family was difficult and I had to make some educated guesses. What is definite is that Joseph did not marry or have any children. However, using the location and the year of his birth I could link him to his mother and her siblings. While I had nothing concrete I narrowed down the family enough to work out the name of one of  Joseph's uncles. This then led me to a family tree on Ancestry. Several of Joseph's uncles and aunts moved to America early in the 20th century and I know now that separate research has turned up information about other members of the family moving to Australia.
I have since been in touch with Sean, the owner of the tree I found on Ancestry, who I calculate to be Joseph's 4th cousin. Sean is located in the USA where many of the Daly family from that generation emigrated to.
Thank you to John J who sent me the medals in the first place. The returned medal tally is now 1218. Unfortunately, the War Medal which Joseph would also have been awarded is missing from the rest of the group. 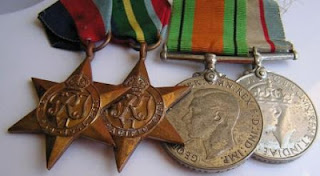 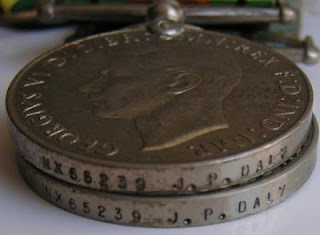 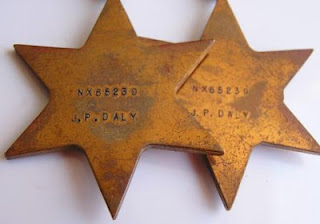 Posted by Lost Medals Australia at 14:49